It’s been a while since I sat down to write about our adventures in the antipodes but I must confess we’ve been a tad busy. So, this episode is a sort of pictorial memory of an enchanting day in New Zealand where we visited the film set that was created for The Hobbit and The Lord of the Rings in Matamata in the north island. The set is known as Hobbiton and is about two and a half hours drive from Auckland but well worth the journey.

Hobbiton, was originally going to be filmed by Peter Jackson using 17 locations but when Jackson saw this location with a specific tree by a lake (see if you can spot it in the photos below) everthing was brought to Matamata. So, this is where Bag End, the home of Bilbo and Frodo can be found. You should be able to spot in the following photographs. To see a larger image just click on the image you wish to see. 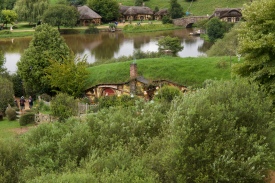