So, Diana and I arrived here a couple of days ago to a wet and soggy Auckland late in the afternoon at:

and quickly checked in to our hotel:

The Sofitel. The reception staff and concierge were exceptionally good and we found ourselves in a lovely room overlooking the marina and

The Sky Tower. You can just make out The Orbital Restaurant through the clouds! It had been a long couple of days to get here and our body clocks dictated it was time for bed. So, we were glad to be in a very comfortable bed and swiftly into the arms of Orpheus.

Sunday morning was a new day but still very soggy with occassional driving rain due to the remnants of a tropical storm which will be hanging around for sometime. After a hearty breakfast, coffee, bircher muesli, fruit, greek yoghourt, spanish omlette, crispy bacon and sausage our driver John took us off for a two hour drive around Auckland. Unfortunately, the weather was still against us but we enjoyed John’s comentary. We particularly enjoyed Devonport mainly because it had stopped raining and we could see the local scenery.

So, here we have John our driver together with Diana, Paul and David admiring the view of Auckland from Mount Victoria Reserve. Mount Victoria is situated above the charming and very pretty suburb of Devonport and Mount Victoria is one of fifty-three exstinct volcanoes that surround this city. We then returned to our hotel having encountered some flood water in a couple of places.

That afternoon Diana, David and Paul decided to take sanctary in the spa while I decided to set forth and brave the elements to visit The New Zealand National Maritime Museum and I’m glad I did. The museum was packed full of exhibits from ancient, large, sea-going canoes that had travelled thousands of mile to the modern day. However, it was just three exhibits that really caught my eye. 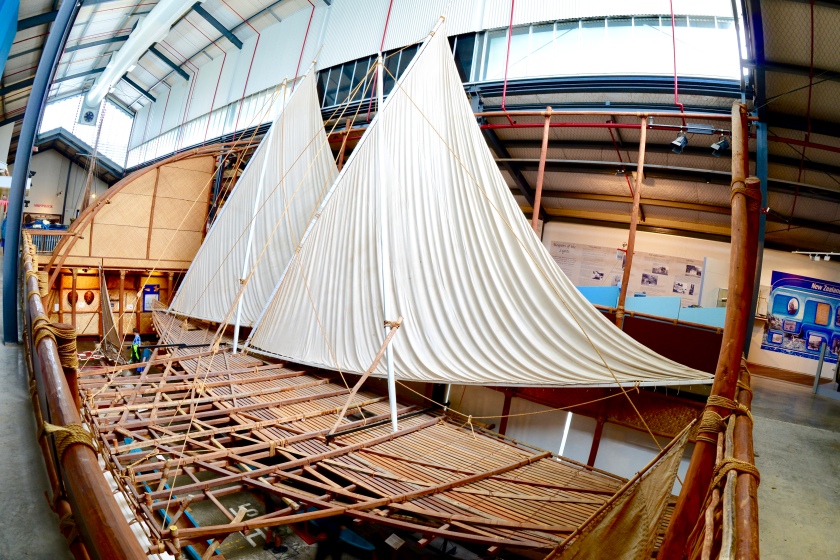 The first was this ancient outrigger canoe of an unusal design. All the timbers were lashed together so it would continually leak and when at sea, the crew would be constantly bailing out water from the hull. The other unusual feature was that when the boat was tacking against the wind the rudder would be transferred from one end of the boat to the other and the sails would be pivoted which would allow the outrigger to always be on the windward side to provide stability. It must have been a tough boat to handle.

The second exhibit that fascinated me was The Rewa.

This boat was built one-hundred and thirty-six years ago by the family that owned her. This was common practise in those days and the family would use “Rewa” to transort produce fron their farm, wool, meat, vegetables etc to the city and would bring home tools, provisions etc.

The final one had of course to be Sir Peter Blake’s yacht NZL 32 “Black Magic” that won the Americas Cup convincingly (five to nil) in 1985 and was the first team to have beaten America in the one-hundred and thirty-five years of the race. New Zealand has continued to be a winner of this ancient sporting event and Sir Peter was a national hero until his murder by pirates off the Amazon delta.

This, of course, was what all the sailing fuss has been about and still is:

The Americas Cup, originally called the One-Hundred Guineas Cup (that was the original cost) until the yacht America won the race. Some call it “The Auld Mug” as its the oldest sporting trophy and some would say pretty ugly!

Later that night we dined at The Soul Restaurant close to the museum and had a superb dinner.